The purpose of this study was to examine the associations between self-reported spiritual/religious concerns and age, gender, and emotional challenges among cancer survivors who have completed a 5-day rehabilitation course at a rehabilitation center in Denmark (the former RehabiliteringsCenter Dallund (RC Dallund)).

The data stem from the so-called Dallund Scale which was adapted from the NCCN Distress Thermometer and comprised questions to identify problems and concerns of a physical, psychosocial, and spiritual/religious nature. Descriptive statistics were performed using means for continuous variables and frequencies for categorical variables. Odds ratios were calculated by logistic regression. 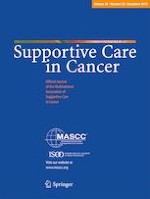 Promoting assessment and management of function through navigation: opportunities to bridge oncology and rehabilitation systems of care

Factors associated with a preference for disclosure of life expectancy information from physicians: a cross-sectional survey of cancer patients undergoing radiation therapy

Sarcopenia in patients with malignant pleural effusion: impact on symptoms, health status, and response to hospitalization

The experience of dysgeusia in allogeneic haematopoietic cell transplantation survivors: a qualitative study