Distal pancreatectomy and splenectomy (DPS) is the procedure of choice for the surgical treatment of pancreatic exocrine cancer localized to the body and tail of the pancreas. Splenic vein thrombosis (SVT) can occur in patients with malignant pancreatic exocrine tumors secondary to direct tumor invasion or compression of the splenic vein by mass effect. This study examines the effect of preoperative SVT on postoperative outcomes. In this retrospective cohort study, we queried our pancreatic surgery database to identify patients who underwent DPS from October 2005 to June 2011. These cases were evaluated for evidence of preoperative SVT on clinical records and cross-sectional imaging (CT, MRI, endoscopic US). Outcomes for patients with and without SVT were compared. From an overall cohort of 285 consecutive patients who underwent DPS during the study period, data were evaluated for 70 subjects who underwent surgery for pancreatic exocrine cancer (27 with SVT, 43 without SVT). The preoperative demographics and co-morbidities were similar between the groups, except the average age was higher for those without SVT (p < 0.05). The median estimated blood loss was significantly higher in the SVT group (675 versus 250 ml, p = <0.001). While the overall morbidity rates were similar between the two groups (48 % SVT versus 56 % no SVT, p = NS), the group with SVT had a significantly higher rate of pancreas-specific complications, including pancreatic fistula (33 versus 7 %, p < 0.01) and delayed gastric emptying (15 versus 0 %, p < 0.02). Hospital readmission rates were similar between the groups (30 versus 28 %, p = NS). Patients without SVT had a trend toward longer median survival (40 versus 20.8 months), although the difference was not statistically significant (p = 0.1). DPS for pancreatic ductal adenocarcinoma can be performed safely in patients with SVT, but with higher intraoperative blood loss, increased pancreas-specific complications, and a trend towards lower long-term survival rates. This paper was presented as a poster at the 53rd annual meeting of the Society for Surgery of the Alimentary Tract and at the 46th annual meeting of the Pancreas Club, San Diego, CA, May 2012.
Anzeige 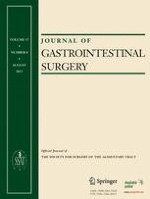 Laparoscopic Colectomy: The View from the United Kingdom

Acute Appendicitis in the Twenty-First Century: Should We Modify the Management Protocol?

External Stent Versus No Stent for Pancreaticojejunostomy: A Meta-analysis of Randomized Controlled Trials

Surgical Stricturoplasty in the Treatment of Ileal Pouch Strictures