In this review, we examine the literature in light of the mechanical principles that govern linear accelerated running. While the scientific literature concerning sprint mechanics is comprehensive, these principles of fundamental mechanics present some pitfalls which can (and does) lead to misinterpretations of findings. Various models of sprint mechanics, most of which build on the spring–mass paradigm, are discussed with reference to both the insight they provide and their limitations. Although much research confirms that sprinters to some extent behave like a spring–mass system with regard to gross kinematics (step length, step rate, ground contact time, and lower limb deformation), the laws of motion, supported by empirical evidence, show that applying the spring–mass model for accelerated running has flaws. It is essential to appreciate that models are pre-set interpretations of reality; finding that a model describes the motor behaviour well is not proof of the mechanism behind the model. Recent efforts to relate sprinting mechanics to metabolic demands are promising, but have the same limitation of being model based. Furthermore, a large proportion of recent literature focuses on the interaction between total and horizontal (end-goal) force. We argue that this approach has limitations concerning fundamental sprinting mechanics. Moreover, power analysis based on isolated end-goal force is flawed. In closing, some prominent practical concepts and didactics in sprint running are discussed in light of the mechanical principles presented. Ultimately, whereas the basic principles of sprinting are relatively simple, the way an athlete manages the mechanical constraints and opportunities is far more complex. 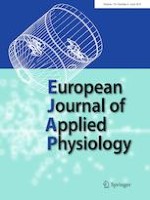 Is reaction time altered by mental or physical exertion?

Reply to the Letter to the Editor: Utility of lacrimal caruncle infrared thermography when monitoring alterations in autonomic activity in healthy humans