Fasciolosis is a zoonotic parasitic disease, which affects humans and animals; diagnosed through noncommercial immunoassay tests that cannot be used on the field. Thereby, establishing the optimal conditions to develop a latex agglutination technique with IgG and IgM antibodies directed against excretion/secretion antigens of Fasciola sp. is a priority. Latex particles were sensitized with IgG and IgM antibodies directed against excretion/secretion antigens of Fasciola sp. The specificity of the antibodies was determined against antigens of different helminths and protozoa; the sensitivity and specificity of the test was evaluated against a previously standardized direct ELISA. The coupling rates of the IgG and IgM antibodies were 85.77 and 100%, respectively. The minimum detectable concentration of Fasciola sp. excretion/secretion antigens, diluted in a phosphate-buffered saline, was 1.589 mg/mL(IgG) and 0.158 mg/mL(IgM) and for the antigens incorporated in the bovine cattle stool it was 3.178 mg/mL(IgG) and 1.589 mg/mL(IgM). The test showed crossed reaction against Giardia sp., and Cryptosporidium sp. antigens. Agreement of the IgG and IgM latex test against the ELISA test was of 78.78 and 96.96%, respectively; the specificity found was of 100% for both tests and sensitivity was 78.79% (IgG) and 96.97% (IgM). This work standardized the latex agglutination technique to detect Fasciola sp. antigens in bovine cattle stool. 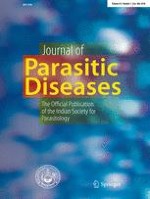