Stoma prolapse is an increase in the size of the stoma secondary to intussusception of the proximal bowel segment. Transverse loop colostomy is most commonly involved. Although ostomy function is rarely impaired, large prolapses may cause patients distress and impair stoma dressing. Strangulation and ischemia of the prolapsed segment have been reported as complications. Herein, we report a stapler-associated repair of a prolapsed transverse loop colostomy with real-time perfusion studies using indocyanine green.

Stoma prolapse is defined as an increase in the size of an ostomy after stoma maturation requiring a change in stoma dressing and/or surgical correction. Stoma prolapse is caused by an intussusception of a bowel segment protruding through the stoma orifice [1, 2]. Ostomy prolapse is a well-known long-term complication that has been reported in up to 11–25% of transverse loop colostomy carriers [3, 4]. Although rarely observed in terminal ostomates, prolapse has been described in up to 11.8% of terminal colostomy carriers in long-term follow-up [5]. The cause of stoma prolapse is unclear. Obesity, increased intra-abdominal pressure, redundant proximal bowel segment, and a large abdominal wall opening have been discussed as possible risk factors for stoma prolapse [6]. Large stoma prolapses can be associated with patient distress. Although stoma function is usually not affected, bowel ischemia or strangulation may complicate stoma prolapse and surgical correction is thus usually indicated.
Herein we present a simple, safe, and fast approach for correcting a prolapsed terminal ostomy. The patient was diagnosed with bowel obstruction due to advanced cancer of the sigmoid colon with hepatic metastasis and infiltration of the pelvic wall and the vascular bundle. A loop transverse colostomy was constructed and palliative chemotherapy was initiated. Owing to intermittent prolapse, the loop transverse colostomy was converted to a terminal transverse colostomy with drainage of the distal colon via a mucous fistula. However, recurrent prolapse of the terminal colostomy occurred with associated problems with stoma care, so that a further surgical correction was indicated.
Anzeige

Surgery was performed with the patient under general anesthesia. The perfusion of the prolapsed bowel segment (Fig. 1) was examined using near-infrared laser fluorescence angiography after intravenous injection of 3 ml of indocyanine green (ICG, VERDYE, Diagnostik Green GmbH, Norderstedt, Germany; Fig. 2). The prolapsed bowel was then divided along its length using a linear cutter (Ethicon, Norderstedt, Germany; Figs. 3, 4 and 5). The resulting split segments were then transversely resected using a curved cutting stapler (Contour, Johnson & Johnson Medical GmbH, Norderstedt, Germany; Fig. 6). The procedure was completed by over-sewing the staple lines (Fig. 7) and documentation of an adequate perfusion again using ICG (Fig. 8). Surgical specimens are presented in Fig. 9, While Fig. 10 shows stoma at 6 months of follow-up.
×
×
×
×
×
×
×
×
×
×

Stoma prolapse is a common problem in ostomy carriers. Although hardly associated with stoma dysfunction, a large prolapse may negatively affect the quality of life owing to distress and difficult stoma care. Besides, strangulation and/or ischemia may occur as complications of the ostomy prolapse. Thus, there is a need for surgical correction.
Many techniques have been described for the management of ostomy prolapse including ostomy closure. In this report, we used a simple stapler-assisted method to correct the prolapse. The prolapsed bowel segment is divided using a linear cutter and the resulting flaps are then resected using a cutting device. Hemorrhage from the mesentery is prevented by over-sewing the stapler lines.
Ostomy complications are known to negatively affect the quality of life of ostomates. Therefore, correcting an ostomy prolapse aims at improving the quality of life. The short duration of surgery of just over 15 min can be seen as a reason to employ this technique in patients with relevant morbidities.
Anzeige
A similar technique has been reported by Hata et al. for the management of prolapsed terminal ostomies [7]. Maeda et al. have equally reported a stapler-assisted repair of prolapsed loop ostomies [8]. All these techniques employ stapling and cutting devices.
A possible pitfall with such stapler-assisted techniques is the risk of hemorrhage and ischemia from divided mesenteric vessels resulting in necrosis, stenosis, or retraction. The use of near-infrared laser fluorescence studies with ICG before and after correction might be helpful in examining the perfusion status before and after prolapse repair, thus reducing the risk of ischemia. Over-sewing the stapler lines, in turn, aims to reduce the risk of hemorrhage.

Ostomy prolapse is a common problem in ostomy carriers. Although ostomy function is not usually affected, the large prolapses might negatively affect the quality of life. Stapler-associated correction in combination with near-infrared fluorescence angiography using ICG described in this manuscript provides a fast, easy, and safe correction with good results. 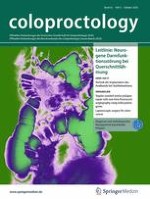