Autism spectrum disorder (ASD) is characterized by persistent deficits in social communication and interaction, and restrictive and repetitive patterns of behavior, interests or activities. This study aimed to analyze trends in ASD diagnosis and intervention in 20 years of data from the Beijing Stars and Rain Education Institute for Autism (SR), the first autism intervention center in mainland China, and from a recent survey of members of the Heart Alliance, an industry association of autism intervention centers in China.

We analyzed the registration data at the SR from 1993 to 2012 for a total of 2,222 children who had a parent-reported diagnosis of ASD and 612 of ‘autistic tendencies’. Most of the children who were the primary focus of our analyses were age six and under. We also analyzed results of a survey we conducted in 2013 of 100 member centers of the Heart Alliance. Generalized Estimating Equations, multiple linear regression and the Mann-Whitney test were used for data analysis. Statistically significant findings are reported here.

The number of hospitals where SR children received their diagnosis increased from several in the early 1990s to 276 at present. The proportion of ‘autistic tendencies’ diagnosis increased 2.04-fold from 1998 to 2012 and was higher for children diagnosed at a younger age. The mean age at first diagnosis of ASD or ‘autistic tendencies’ decreased by 0.27 years every decade. A higher level of parental education was statistically significantly associated with an earlier diagnosis of the child. The mean parental age at childbirth increased by about 1.48 years per decade, and the mean maternal age was 1.40 and 2.10 years higher than that in the national population censuses of 2000 and 2010, respectively. At the time of the survey 3,957 children with ASD were being trained at the 100 autism intervention centers. Ninety-seven of these centers opened after the year 2000. Economically underdeveloped regions are still underserved. 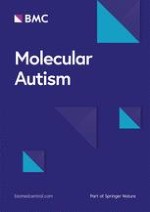 N-ethylmaleimide-sensitive factor interacts with the serotonin transporter and modulates its trafficking: implications for pathophysiology in autism

Transcriptomic changes in the frontal cortex associated with paternal age