Midgut carcinoid (MGC) tumors generally develop in the small intestine and in >50% of cases also present with lymph node metastases in the mesentery. The majority of these tumors are surgically resectable, but a fraction are inoperable and may cause obstruction of the superior mesenteric vein (SMV), often associated with stasis of the intestinal wall and severe symptoms. These symptoms include severe abdominal pain, attacks of diarrhea, and malnutrition.

Seven patients with severe MGC including a large fibrotic inoperable mesenteric mass and severe symptoms were studied. After an obstructed SMV and signs of venous stasis in the small intestine were demonstrated, an expandable stent was inserted after puncturing an intrahepatic portal venous branch. The associated venography, patient symptoms, and radiological signs on computed tomography (CT) scans were evaluated.

We conclude that in selected patients with MGC stenting of the SMV may improve symptoms. 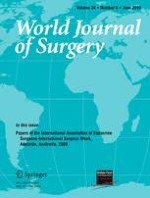 Secondary and Tertiary Hyperparathyroidism: The Utility of ioPTH Monitoring

Three Distinctly Different Kinds of Papillary Thyroid Microcarcinoma should be Recognized: Our Treatment Strategies and Outcomes

A Tale of Two Celts