Esophageal squamous intraepithelial neoplasia (ESIN) as a precursor for invasive carcinoma is classified into low-grade IN (LIN) and high-grade IN (HIN), the latter including carcinoma in situ (CIS). Increasing grades of ESIN are associated with increasing risk of invasive carcinoma, but differentiation among LIN, HIN, and CIS is subjective and challenging. As p63, a member of the p53 family, is known to regulate differentiation and proliferation in epithelial progenitor cells, its expression, along with that of cytokeratin (CK) 14 (basal squamous marker) and Ki-67 (proliferation marker), might be of diagnostic assistance.

Immunohistochemical staining was performed on endoscopically resected specimens from 69 patients (73 lesions) with ESIN between 2008 and 2010. Specimens having no atypical cells distant from ESIN were defined as negative for IN (NIN).

This study suggests that p63 and p53 are coordinately upregulated in esophageal squamous carcinogenesis, and assessment of their expression might provide a useful adjunct tool for differential diagnosis of ESIN. 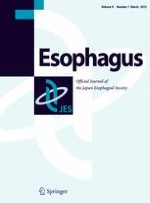