Readmission within 30 days after hospital discharge for common cardiovascular conditions such as heart failure and acute myocardial infarction is extremely common among older persons. To incentivize investment in reducing preventable rehospitalizations, the United States federal government has directed increasing financial penalties to hospitals with higher-than-expected 30-day readmission rates. Uncertainty exists, however, regarding the best approaches to reducing these adverse outcomes. In this review, we summarize the literature on predictors of 30-day readmission, the utility of risk prediction models, and strategies to reduce short-term readmission after hospitalization for heart failure and acute myocardial infarction. We report that few variables have been found to consistently predict the occurrence of 30-day readmission and that risk prediction models lack strong discriminative ability. We additionally report that the literature on interventions to reduce 30-day rehospitalization has significant limitations due to heterogeneity, susceptibility to bias, and lack of reporting on important contextual factors and details of program implementation. New information is characterizing the period after hospitalization as a time of high generalized risk, which has been termed the post-hospital syndrome. This framework for characterizing inherent post-discharge instability suggests new approaches to reducing readmissions. 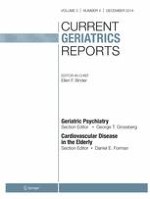 Management of Behavioral and Psychological Symptoms of Dementia