STZ, a glucosamine-nitrosourea compound obtained from Streptomyces achromogenes, is used as an experimental tool to develop animal models to study diabetes and associated complications that include diabetic peripheral neuropathy (DPN). Several mechanisms, including increase in oxidative/nitrosative stress have been proposed for STZ-induced β-cell death. Further, the ability of STZ to act as a NO donor has led many investigators to postulate that NO is involved in STZ-induced β-cell death [ 1– 3]. Recently, it has been proposed that pancreatic β-cells are selectively sensitive to STZ, because they contain higher levels of O-GlcNAc-selective N-acetyl-b-d-glucosaminidase (OGIcNAcase, an enzyme responsible for attaching O GlcNAc to proteins) than any other cell type [ 4– 6]. STZ has been shown to inhibit the enzyme OGlcNAcase, which causes cytotoxicity selectively to β-cells [ 4, 6].
DPN has been characterized by early thermal and mechanical hyperalgesia in different animals models [ 7, 8]. It has been proposed that STZ-induced hyperglycemia contribute to the development of hyperalgesia [ 7, 9], but it is becoming evident that factors other than hyperglycemia may be involved in development of early hyperalgesia following STZ treatment [ 10– 13]. Studies have suggested that intracerebroventricular administration of STZ can cause behavioral alterations and changes in brain pathology independent of changes in β-cells [ 14]. Previous studies from our laboratory have shown that STZ exerts a direct action on dorsal root ganglion (DRG) neurons altering the expression and function of TRPV1 via the reactive oxygen species (ROS)-p38 Mitogen Activated Protein Kinase (MAPK) pathway in mice [ 12]. In in-vitro studies, STZ-treated neurons exhibited an increase in TRPV1-mediated currents through the ROS-mediated pathway. We further observed that STZ also caused an increase in the phosphorylated form of p38 MAPK, suggesting that the increase in the TRPV1 protein expression may involve the ROS-p38 MAPK pathway [ 12]. All these changes were independent of glycemic state of the animals.
Anzeige
There is growing evidence that supports a prominent role of inflammation in the development and maintenance of neuropathic pain. Microglia and astrocyte activation is observed in the spinal cord following PNS/CNS injury and STZ-induced neuropathic pain [ 15– 18]. Analgesic effect of inhibitors of phosphorylation of the MAPKs and Extracellular Signal-regulated Protein Kinase (ERK) [ 18– 20] further substantiate the role of inflammation in STZ-induced neuropathic pain. Activated microglia and their interaction with neurons in spinal cord are associated with the development and maintenance of neuropathic pain [ 21, 22]. Enhanced levels of pro-inflammatory cytokines and neuroinflammation can sensitize TRPV1 and increase the pain sensitivity [ 23, 24]. On the other hand, stimulation of TRPV1 can mediate the release of pro-inflammatory cytokines, neuropeptides (SP and CGRP), and glutamate through influx of Ca 2+ in the activated microglia. These changes may underlie the development of central sensitization leading to neuropathic pain [ 25].
Resiniferatoxin (RTX) is a potent TRPV1 agonist and its analgesic actions can be explained by its ability to cause depolarization block of the peripheral or central terminals in the short-term and nerve terminal ablation in the long-term [ 26– 29]. Earlier studies have shown that intrathecal and intraganglionic administration of RTX induced long-lasting analgesia suggesting the possibility of nerve terminal ablation [ 27, 29– 31]. In dorsal root ganglion and dorsal horn (DRG-DH) neuronal co-cultures and in acute spinal cord or caudal spinal trigeminal nucleus slice preparations, RTX enhanced frequency of spontaneous and miniature excitatory post synaptic currents (mEPSCs), without affecting their amplitude, suggesting a presynaptic locus of action [ 27, 32]. However, evoked synaptic currents were inhibited due to slow and sustained activation of presynaptic TRPV1 leading to depolarization block by maintaining the Na + channels in an inactivated state at the central sensory nerve terminals [ 27].
This study was undertaken to investigate the role of TRPV1 expressed in the central sensory nerve terminals of the spinal cord following intraperitoneal administration of STZ. We have found that STZ-induced thermal and mechanical hyperalgesia were independent of glycemic state of the animal. STZ exerted a direct effect by inducing enhanced expression of TRPV1 and a resultant increase in TRPV1-mediated neuropeptide release. STZ also caused microglial activation in the spinal cord and increased the levels of inflammatory mediators. Intrathecal administration of RTX decreased TRPV1-mediated neuropeptide release and alleviated thermal hypersensitivity without affecting mechanical hypersensitivity.

In order to correlate the development of early phase of thermal and mechanical hyperalgesia with the changes in the spinal cord, we performed immunohistochemistry to determine microglial activation (staining for OX-42) and relative TRPV1 expression in spinal dorsal horn tissue in vehicle-treated, STZ-HG and STZ-NG animals. There are reports suggesting the involvement of inflammation, microglial activation and increased TRPV1 expression and function in STZ-induced hyperalgesia [ 12, 16, 18]. Following i.p. administration of STZ, the intensity of OX-42 staining increased significantly in the laminae I and II of spinal dorsal horn in both STZ-HG and STZ-NG animals as compared to vehicle-treated animals (Figure 3). STZ treatment also significantly increased the TRPV1 staining in central terminals of spinal dorsal horn as compared to vehicle-treated animals (Figure 4). The intensity of TRPV1 activation was similar in both STZ-HG and STZ-NG animals. STZ-induced microglial activation and increased TRPV1 expression in spinal dorsal horn is independent of glycemic state of animals. These results suggest that the effects are possibly due to direct actions of STZ rather than as a result of hyperglycemia.
×
×

In conclusion, we have shown in this study that STZ, independent of its ability to cause β-cell damage and hyperglycemia, can cause activation of microglia, and release pro-inflammatory agents in spinal dorsal horn. This further enhanced the expression of TRPV1 and influx of Ca 2+, leading to the development of central sensitization and contributes to thermal hyperalgesia. Attenuation of thermal hyperalgesia and TRPV1-mediated CGRP release by intrathecal administration of RTX confirm the role of TRPV1 in STZ-induced inflammatory thermal hyperalgesia.

The experimental procedures especially in reference to animals not experiencing unnecessary discomfort, distress, pain or injury have been approved by the Southern Illinois University School of Medicine Institutional Animal Care and Use committee review panel in accordance with the Panel of Euthanasia of American Veterinary Medical Association. Two days after STZ injection animals were divided in three different groups as described previously. Animals were tested for thermal and mechanical sensitivities for 2 weeks (once/week). After 2 weeks, rats in STZ-HG and STZ-NG groups received intrathecal (L4/L5 intraspinal space) injection of 2 μg/kg/20 μl of RTX in saline under isoflurane anesthesia (2% oxygen) [ 29, 63]. Control group received a corresponding volume of vehicle. All the rats were acclimatized to the test conditions 1 hour/day for 5 days before starting the experiments.

Thermal nociceptive responses were determined using a plantar test instrument (Ugo Basile, Camerio, Italy). The rats were habituated (15 minutes acclimation period) to the apparatus that consisted of three individual Perspex boxes on a glass table. A mobile radiant heat source was located under the table and focused onto the desired paw. Paw withdrawal latencies (PWLs) were recorded three times for each hind paw and the average was taken as the baseline value. A timer was automatically activated with the light source, and response latency was defined as the time required for an abrupt withdrawal of the paw. The apparatus has been calibrated to give a normal PWL of approximately 10-12 s. In order to prevent tissue damage, an automatic cut-off at 20 s was set.

Mechanical nociceptive responses were assessed using a dynamic plantar anesthesiometer instrument using von Frey hairs (Ugo Basile, Camerio, Italy). Each rat was placed in a chamber with a metal mesh floor and was habituated (15 minutes acclimation period) to the apparatus. A 0.5 mm diameter von Frey probe was applied to the plantar surface of the rat hind paw with pressure increasing by 0.5 g/s and the pressure at which a paw withdrawal occurred was recorded and this was taken as Paw Withdrawal Threshold (PWT). For each hind paw, the procedure was repeated 3 times and the average pressure to produce withdrawal was calculated. Successive stimuli were applied to alternating paws at 5 min intervals. All the experiments involving behavioral studies were performed by the experimenter who was unaware of treatments.

A series of 3 glass tubes were filled with 0.5 ml SIF each and positioned in a temperature controlled (32°C) shaking bath. The release experiment was started by transferring the mounted spinal cord segments into the first tube. After 5 min incubation, tissues were transferred to the second tube for another 5 min and then moved to the third tube containing capsaicin (10 -5 M, (8-methyl- N-vanillyl-6-nonenamide, Sigma Aldrich, St Louis, MO, USA) for 5 minutes. Capsaicin was prepared as stock solutions in ethanol (100 m M for capsaicin) and diluted to desired concentrations using physiological solution prior to the experiments. The control experiments were performed with the equivalent amounts of the solvent. All the solutions were freshly prepared before the experiments.

Statistical analysis was performed using SPSS software. Data are presented as mean ± SEM. Descriptive one way analysis of variance (ANOVA) was used to compare PWL and PWT at given time point for vehicle and/or STZ and/or RTX treated animals. Descriptive one way ANOVA followed by post hoc Tukey's HSD was used to compare more than 2 groups. A p value of < 0.05 was considered as statistically significant.

This work was supported by grants from National Institutes of Health (DA028017) and EAM award from SIUSOM. 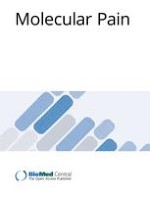