The onset of ischemic stroke symptoms has been established to have a diurnal variation, with a sizeable proportion (8–28%) occurring during sleep. Obstructive sleep apnea (OSA) has been established as an important risk factor for ischemic stroke. However, data on the relationship between OSA and wake-up stroke (WUS) has been scarce. The aim of our study is to determine the relationship between OSA and WUS.

This is a case-control study conducted on acute stroke patients who presented to one of two major medical centers in Riyadh of Saudi Arabia. Those who woke up with the symptoms were labeled as WUS, and those whose stroke occurred while awake were labeled as non wake-up stroke (NWUS). The Berlin Questionnaire, which was submitted to either the patient or his/her partner, was used to determine the frequency of OSA in the two groups. 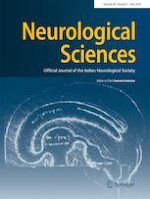 An unusual case of PML in HIV patient presenting with diplopia