Homocysteine and its cyclic ester homocysteine thiolactone (HTL) have been involved in the detrimental consequences associated to hyperhomocysteinemia, an independent risk factor for vascular diseases. HTL reacts with protein lysine residues in a process named N-homocysteinylation. The aim of our study was to evaluate the in vitro effects of HTL on the fibrinogen through electrophoretic methods. Fibrinogen was incubated with HTL at different molar ratios and structural changes of the protein were assessed by polyacrylamide gel electrophoresis (PAGE), capillary zone electrophoresis (CZE) and capillary isoelectric focusing (CIEF). Ellman´s reaction, CZE and proton nuclear magnetic resonance (1H NMR) were used to evaluate HTL hydrolyisis. On denaturing PAGE numerous bands were observed, being the three lower bands identical to those obtained by treatment with 2-mercaptoethanol. This effect was also detected by CZE. The results show a reducing action of HTL on the fibrinogen molecule, probably attributed to the sulfhydryl groups generated by N-homocysteinylation and/or by the ones present in the homocysteine molecule yielded by HTL hydrolysis. In order to distinguish between these two options, HTL stability was evaluated at different pH and incubation times. The results showed minimum HTL hydrolysis in our experimental conditions. We postulate that the reducing effect observed would be mainly associated to the new sulfhydryl groups generated by the N-homocysteinylation process. Moreover, a displacement of the HTL-treated fibrinogen isoforms towards more acidic pH values was detected. The structural changes of N-homocysteinylated fibrinogen could be involved in the pathological consequences of hyperhomocysteinemia. 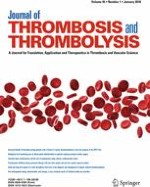 A sticky situation: myocardial infarction in a young woman with immune thrombocytopenia on eltrombopag and a history of mediastinal radiation