Functional and anatomical hemispheric asymmetries abound in the neural language system, yet the relationship between them remains elusive. One attractive proposal is that structural interhemispheric differences reflect or even drive functional language laterality. However, studies on structure–function couplings either find that left and right language dominant individuals display similar leftward structural asymmetry or yield inconsistent results. The current study aimed to replicate and extend prior work by comparing structural asymmetries between neurologically healthy left-handers with right hemispheric language dominance (N = 24) and typically lateralized left-handed controls (N = 39). Based on structural MRI data, anatomical measures of six ‘language-related’ perisylvian structures were derived, including the surface area of five gray matter regions with known language functions and the FDC (combined fiber density and fiber-bundle cross-sectional area) of the arcuate fasciculus. Only the surface area of the pars triangularis and the anterior insula differed significantly between participant groups, being on average leftward asymmetric in those with typical dominance, but right lateralized in volunteers with atypical language specialization. However, these findings did not survive multiple testing correction and the asymmetry of these structures demonstrated much inter-individual variability in either subgroup. By integrating our findings with those reported previously we conclude that while some perisylvian anatomical asymmetries may differ subtly between typical and atypical speech dominants at the group level, they serve as poor participant-specific predictors of hemispheric language specialization.
Anzeige 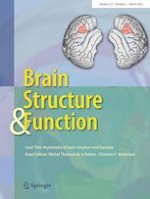 Broca’s area and the search for anatomical asymmetry: commentary and perspectives

Brain–behavior dynamics between the left fusiform and reading

A short review on emotion processing: a lateralized network of neuronal networks