Robotic-assisted surgery by the da Vinci Si appears to benefit rectal cancer surgery in selected patients, but still has some limitations, one of which is its high costs. Preliminary studies have indicated that the use of the new da Vinci Xi provides some added advantages, but their impact on cost is unknown. The aim of the present study is to compare surgical outcomes and costs of rectal cancer resection by the two platforms, in a single surgeon’s experience.

From April 2010 to April 2017, 90 robotic rectal resections were performed, with either the da Vinci Si (Si-RobTME) or the da Vinci Xi (Xi-RobTME). Based on CUSUM analysis, two comparable groups of 40 consecutive Si-RobTME and 40 consecutive Xi-RobTME were obtained from the prospectively collected database and used for the present retrospective comparative study. Data costs were analysed based on the level of experience on the proficiency–gain curve (p–g curve) by the surgeon with each platform.

Our experience confirms a significant reduction of costs with increasing surgeon’s experience with both platforms. However, the economic gain was higher with the Xi with shorter OT, reduced PC and CC, in addition to a significantly larger number of cases performed by the fully robotic approach. 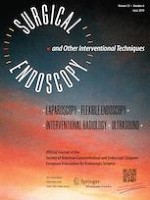 Use of magnets in gastrointestinal surgery

Peroral endoscopic myotomy (POEM) for the treatment of pediatric achalasia: a systematic review and meta-analysis