As there is currently no gold standard for the diagnosis of SIJ dysfunction, a broad variety of tests exist to clinically identify pelvic girdle pain caused by reversible SIJ dysfunction. Some of the pain provocation tests have already been evaluated. However, the tests used by the majority of German physicians competent in manual medicine (MM) have not yet been evaluated. Therefore, such an evaluation is necessary.

The aims of the study were to evaluate the reliability of functional and pain provocation tests used in SIJ diagnostics, and to propose a useful set of reliable tests.

The Cohen’s kappa coefficients of the newly evaluated tests were better (κ = 0.76–1.00) than those of the previously evaluated tests (κ = 0.65–0.89). The functional tests had a lower κ‑coefficient and an overly wide confidence interval (CI), and were thus evaluated as being not reliable and only suitable as screening tests. 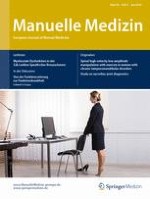