To define the detection rate, sensitivity, and negative predictive value (NPV) of the sentinel node technique in patients with endometrial cancer.

Patients with endometrial cancer after informed consent underwent subserosal injection of blue dye during hysterectomy in a tertiary gynae/oncology department between 2010 and 2014. The procedure was performed in all cases by the same team including two gynae/oncologist consultants and one trainee. All relevant perioperative clinicopathological characteristics of the population were recorded prospectively. The identified sentinel nodes were removed separately and a completion bilateral pelvic lymphadenectomy followed in all cases. Simple statistics were used to calculate the sensitivity and NPV of the method on per patient basis.

Our study is in accordance with previous studies of sentinel node in endometrial cancer and further demonstrates and enhances the confidence in the technique. In the current era of an ongoing debate on whether a systematic lymphadenectomy in patients with endometrial cancer is still necessary, we believe that the sentinel node is an acceptable alternative and should be applied routinely in tertiary centres following a strict algorithm. 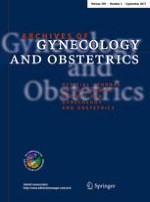 HIV infection or HAART therapy: what is the cause of adverse obstetric outcomes

Is there any relationship between adipocytokines and angiogenesis factors to address endothelial dysfunction and platelet aggregation in untreated patients with preeclampsia?

Comparison of maternal and fetal complications in elective and emergency cesarean section: a systematic review and meta-analysis