Targets for substrate-based catheter ablation of scar-related ventricular tachycardia (VT) include sites with fractionated and late potentials (LPs). We hypothesized that in patients with cardiac resynchronization therapy (CRT), the pacing mode may influence the timing of abnormal electrograms (EGMs) relative to the surface QRS complex.

The sequence of ventricular activation, as determined by the pacing site in patients with CRT devices, has a major influence on the detection of late potentials during substrate-guided ablation. Further study is warranted to define the optimal approaches, including the rhythm, for substrate mapping, but our findings suggest that BiV pacing may be most likely to obscure detection of late potentials as compared to single-site pacing. 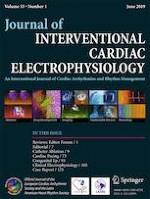 The benefit of closed loop stimulation in patients with cardioinhibitory vasovagal syncope confirmed by head-up tilt table testing: a systematic review and meta-analysis