Osteoporosis remains under-treated in minimal-trauma fracture subjects. The aim of this study was to determine if direct intervention at orthopaedic fracture clinics would improve post-fracture management in these subjects.

From March 2004 to March 2006, 155 consecutive minimal-trauma fracture subjects (mean age 64.0 ± 17.6) attending fracture clinics at St. Vincent’s Hospital, Sydney, had a specific medical assessment, following which they were recommended BMD and laboratory testing. Treatment recommendations were given after review of investigations with further follow-up at a median of 8.6 months following therapy. Comparison of outcomes was made with a similar group of patients given written information 2 years prior. 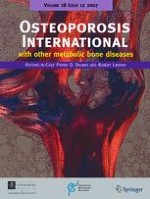 An association between socioeconomic, health and health behavioural indicators and fractures in young adult males

Hip fractures in users of first- vs. second-generation bisphosphonates