To evaluate in a retrospective, single-center, case series if percutaneous transluminal renal angioplasty/stenting of chronic renal artery occlusion is beneficial to renal function and blood pressure control, which remains controversial.

Data from 15 consecutive patients with renal artery stump who underwent successful percutaneous transluminal renal angioplasty/stenting only for unilateral chronic renal artery occlusion at our center from January 2007 to February 2018 and completed follow-up were retrospectively evaluated. Of the 15 patients, 14 (93.3%) were treated with stenting and 1 with only balloon angioplasty. Estimated glomerular filtration rate (eGFR) was calculated using the Modification of Diet in Renal Disease (MDRD) formula corrected for Chinese, and changes in blood pressure and need for antihypertensive medications were recorded.

At median 1.5-year (interquartile range 0.5–5.0) follow-up, restenosis rate was 20.0%. Renal function improved or remained stable in 26.7% and 53.3% of patients, respectively, and blood pressure normalized or improved in 13.3% and 40.0% of patients, respectively. Young patients with Takayasu’s arteritis or fibromuscular dysplasia appeared to benefit the most from revascularization. 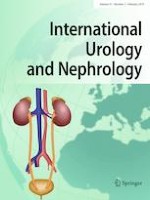 The effect of chronic kidney disease on lipid metabolism

Transvesical laparoendosopic single-site surgery as a valuable option to remove eroded materials from the bladder: single-center experience and a review of the literature