A retrospective post-mortem analysis was undertaken to determine the aetiology of sudden cardiac death (SCD) amongst individuals aged ≤35 years who died in Ireland in 2005.

The Central Statistics Office registered 122 deaths amongst those aged ≤35 that were possibly due to a cardiac cause based on the ICD-9 classification system. Fifty three cases were excluded because no post-mortem was performed (n = 29), reports were insufficient or unavailable (n = 10), because death was non-cardiac (n = 12) or occurred following a medical procedure (n = 2). Victims were predominantly male. The commonest finding at autopsy in those <14 years of age was a structurally normal heart in 20/27 subjects (74%) and in those aged 14–35 years was hypertrophic cardiomyopathy or left ventricular hypertrophy in 17/42 subjects (40.5%). 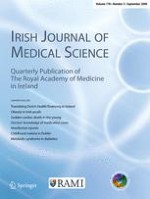 Introduction of “international syringe labelling” in the Republic of Ireland

A rare cause of fatal intracranial haemorrhage