Suicide using a combination of a plastic bag over the head and inhalation of a non-irritating gas, such as helium, argon or nitrogen, has been reported in the literature. Here an unusual suicide method in a 17-year old man by suffocation from covering the face with household plastic wrap, combined with nitrous oxide inhalation, is presented. The case was reviewed based on police, autopsy and hospital reports. A PubMed search for scientific literature related to nitrous oxide abuse and suicide by suffocation was performed and our findings discussed in relation to the scientific literature found. The deceased was a 17-year old man who was found with the nose and mouth closed with a piece of kitchen plastic wrap. The plastic wrap had been removed prior to autopsy. Autopsy findings were suggestive of asphyxia, but were otherwise negative. Nitrous oxide was detected in the brain and lung tissue with headspace-gas chromatography-mass spectrometry (headspace-GCMS). The cause of death was assumed to be suffocation caused by plastic wrap covering the face, combined with nitrous oxide inhalation. Suicide was suspected because of a history of depression for several months. Nitrous oxide, also known as laughing gas, has a euphoric effect and is used as a recreational inhalant drug that can be purchased legally. Deaths caused by recreational nitrous oxide abuse are rare but may occur if used in combination with a plastic bag over the head. This is the first report of suicide by suffocation by external obstruction combined with nitrous oxide inhalation. 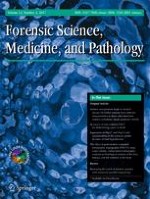 Drowning and near drowning in rivers

Increasing the reach of forensic genetics with massively parallel sequencing