In humans, most fatalities from slaughterer’s guns are suicides committed by persons familiar with stunning devices. The great majority of cases accounts for shots to the head, especially the frontal region. Only a small number of two subsequent cranial shots from captive-bolt humane killers have been reported up to now. In the case presented by the authors, a suicide by simultaneous shots to the head fired from two different makes of captive-bolt guns (one of them having two separate outlets for the combustion gases in the muzzle plane, the other type having no additional openings) is described for the first time. One of the shooting devices remained in firm contact with the left hand and produced patterned staining from rust corresponding to the surface relief of the gun. The medicolegal and criminalistic aspects of this unique case are discussed with reference to the pertinent literature. 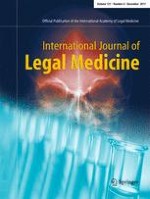 Genetic characterization of an X-STR decaplex system in the State of Mato Grosso, Brazil: distribution, forensic efficiency and population structure