Supragastric belching (SGB) may play a role in the pathophysiology of proton pump inhibitors (PPIs)-refractoriness in gastroesophageal reflux disease (GERD). SGB may be present in up to 40% of reflux symptoms in PPI-refractory GERD. Most reports on SGB have come from Western countries, and little is known about the prevalence and relevance of SGB in Asian refractory GERD patients. This study aimed at comparing the role of SGB in GERD patients in Japan and the UK.

We re-analyzed impedance-pH monitoring tracings from patients who were referred to tertiary centers in Japan and the UK due to PPI-refractory reflux symptoms. The prevalence of excessive SGB and the impact of SGB on reflux symptoms were compared between the two countries.

The prevalence of SGB and their impact on reflux symptoms is significantly lower in Japan compared to the UK. The difference is not related to reflux parameters but might come from ethnic/cultural factors to be further characterized. 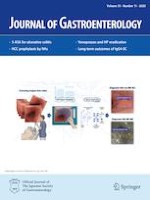 Secondary prevention for hepatocellular carcinoma in patients with chronic hepatitis B: are all the nucleos(t)ide analogues the same?