Oncogenic potential of Blastocystis species have been predicted on reporting the enhanced proliferation of human colorectal cancer cells by the parasite solubilized antigen in vitro, and the enhanced drug-induced carcinogenesis by infection in vivo. The present study is the first to investigate some phenotypic characters, namely the surface ultrastructure, protein profiles and protease activity of Blastocystis sp. isolated from three different clinical groups: colorectal carcinoma (CRC) patients, symptomatic and asymptomatic infected persons. Under SEM, all CRC Blastocystis sp. isolates had a very rough intensely folded surface in comparison to the less rough and completely smooth surface of all symptomatic and asymptomatic Blastocystis sp. Non-CRC isolates, respectively. Under reducing conditions, the sodium dodecyl sulfate–polyacrylamide gel electrophoresis had shown a significant presence of 2 protein bands of 230 and 32 KDa in 42.9% of Blastocystis sp. CRC isolates with their complete absence from Non-CRC isolates. While using non-reducing condition with the incorporation of gelatin in the gel to study the protease activity of the parasite, no significant difference existed between isolates of the three groups. In conclusion, the significant difference in surface ultrastructure and in protein profiles exists between Blastocystis sp. of CRC and Non-CRC isolates. These differences might be either secondary to the altered gut environment in the presence of CRC or are indicators of a different pathogenic potential of the parasite isolates inducing malignancy. 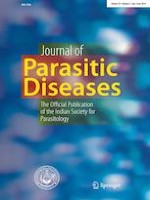 Cutaneous leishmaniasis: an epidemiological study in southwest of Iran