The role of extended resections in the management of advanced pancreatic neuroendocrine tumors (PNETs) is not well defined. 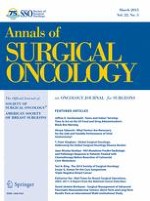 Coupling of Prostate and Thyroid Cancer Diagnoses in the United States

Total Gastrectomy for Gastric Cancer: An Analysis of Postoperative and Long-Term Outcomes Through Time