Solid pseudopapillary tumors (SPTs) are rare, benign tumors of the pancreas that present as heterogeneous masses. We sought to evaluate the short- and long-term outcomes of surgical resected SPTs. Patients managed via initial surveillance were compared to those who underwent upfront resection.

A prospectively maintained institutional database was used to identify patients who underwent surgical resection for a SPT between 1988 and 2018. Data on clinicopathological features and outcomes were collected and analyzed.

Seventy-eight patients underwent surgical resection for SPT during the study period. The mean age was 34.0 ± 14.6 years and a majority were female (N = 67, 85.9%) and white (N = 46, 58.9%). Thirty patients (37.9%) were diagnosed incidentally. Imaging-based presumed diagnosis was SPT in 49 patients (62.8%). A majority were located in the body or tail of the pancreas (N = 47, 60.3%), and 48 patients (61.5%) underwent a distal pancreatectomy. The median tumor size was 4.0 cm (IQR, 3.0–6.0), nodal disease was present in three patients (3.9%), and R0 resection was performed in all patients. No difference was observed in clinicopathological features and outcomes between patients who were initially managed via surveillance and those who underwent upfront resection. None of the patients under surveillance had nodal disease or metastasis at the time of resection; however, one of them developed recurrence of disease 95.1 months after resection. At a median follow-up of 36.1 months (IQR, 8.1–62.1), 77 (%) patients were alive and one patient (1.3%) had a recurrence of disease at 95.1 months after resection and subsequently died due to disease.

SPTs are rare pancreatic tumors that are diagnosed most frequently in young females. While a majority are benign and have an indolent course, malignant behavior has been observed. Surgical resection can result in exceptional outcomes.
Anzeige 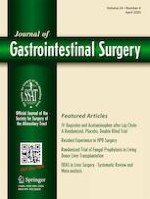 Plexiform Fibromyxoma of the Stomach

Preoperative Endoscopic and Radiologic Evaluation of Bariatric Patients: What Do They Add?

Clinicopathological Features, Recurrence Patterns, and Prognosis of Pancreatic Adenocarcinoma with Normal Serum CA19-9. A Consecutive Series of 154 Cases from a Single Institute