Accidental foreign body ingestion is a common phenomenon in children between 6 months to 6 years of age. In adults, foreign body ingestion is commonly observed in the geriatric population and in patients with psychiatric disorders. Over 80% of ingested foreign bodies pass uneventfully through the intestinal tract. Endoscopic retrieval is needed in about 20% while surgical intervention is indicated in less than 1%. Herein we report an extremely rare case of esophagocutaneous fistula following operative retrival of an impacted denture in the esophagus with spontaneous healing within 3 weeks. A similar case to the best of our knowledge has so far not been reported previously.

A case of accidental ingestion of a dental prosthesis in a 35-year old schizophrenic patient is presented. The patient was referred to our department after accidentally swallowing one of his dental prosthesis. Surgical retrieval was indicated after two unsuccessful endoscopic retrieval attempts. The denture was retrieved following a longitudinal incision of the esophagus via a left cervical approach. The postoperative course was complicated by a clinically suspected esophagocutaneous fistula which was managed conservatively via nothing per os with enteral feeding via a nasogastric tube. Secretion ceased 3 weeks later and a fistula could not be found on contrast enhanced radiographic examination with gastrographin®. 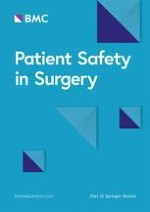 Incidence, root cause, and outcomes of unintentionally retained intraabdominal surgical sponges: a retrospective case series from two hospitals in Togo

Surgical site infection and its associated factors following cesarean section: a cross sectional study from a public hospital in Ethiopia

Evaluation of a multimodal pain therapy concept for chronic pain after total knee arthroplasty: a pilot study in 21 patients

The impact of economic rationalization, prioritization and rationing on job satisfaction, motivation and team cohesion in hospitals: a survey among retired physician executives in Germany

Risk factors for surgical site infections in obstetrics: a retrospective study in an Ethiopian referral hospital