Prior to surgical procedures, all patients undergo preoperative and pre-anesthetic evaluations by their surgeons and anesthesia providers. In the Unites States (US), global fees for surgeons and anesthesiologists compensate for those evaluations. Surgeons and anesthesia providers refer a subset of surgical patients for preoperative evaluations by consultants in other medical specialties, which the consultant separately bills for and may initiate downstream testing and care at additional expense. Evidence is limited about the appropriateness of preoperative consultation usage and the value of the resources expended on consultations.
Previous studies have reported wide variability in usage of preoperative medical consultation (Fleisher et al. 2009; Evaluation ASoATFoP 2002), which is consistent with the absence of clear recommendations from evidence-based practice guidelines directing how to select surgical patients for referral to other specialties (Katz et al. n.d.; Clelland et al. 1996; Auerbach et al. 2007; Wijeysundera et al. 2010). Indeed, a survey of anesthesiologists and surgeons involved in referrals for preoperative consultations indicated substantial disagreement among the specialties as to the reasons for obtaining consultations (Katz et al. 1998). Evidence is also varied about the risk factors that trigger referral for preoperative consultation. Previous studies have suggested that comorbidity burden is an important determinant (Auerbach et al. 2007; Wijeysundera et al. 2010); however, an analysis of Medicare claims for patients undergoing cataract surgery found that non-medical factors primarily explained variation in usage of preoperative consultations (Thilen et al. 2014).
Anzeige
In an earlier analysis of an integrated health care system, surgical specialty helped predict usage of preoperative consultations (Thilen et al. 2013). The finding has not been assessed for generalizability in other settings. Therefore, we analyzed commercial insurance claims from the Northwest US to test the hypothesis that surgical specialty is an important predictor of referral for preoperative medical consultation among commercially insured patients.

The University of Washington Human Subjects Division reviewed this study and determined that it is not a human subject research.

We evaluated a retrospective cohort of surgical claims from Premera Blue Cross, a commercial insurance company based in Seattle, Washington (WA). All patients were Washington State residents, aged 18–80 years old, and had undergone one of 30 a priori selected common inpatient or outpatient surgical procedures in calendar year 2010. We selected surgical procedures to include commonly performed procedures representing a spectrum of surgical risk (see the “Appendix” section for included procedures and their frequencies in the study cohort). We included eight different surgical specialties: general surgery, ophthalmology, gynecology, orthopedics, urology, otolaryngology, neurosurgery, and vascular surgery. Surgical events were nested within surgeons, and surgeons were nested within provider organizations.
We identified eligible procedures by the patient’s first occurrence of a Current Procedural Terminology (CPT) code for one of the specified procedures. We identified the primary endpoint—preoperative medical consultation within the 42-day preoperative period—by the presence of any CPT code for outpatient consultation (99242-99245) or inpatient consultation (99252-99255). We included consultations provided by family physicians, general internists, pulmonologists, cardiologists, endocrinologists, or nurse practitioners. We also included office visits modified with an International Classification of Diseases, 9th Revision, Clinical Modification (ICD-9-CM) code v72.81-v72.84, indicating that the visit was a separately billed preoperative evaluation. We chose a period of 42 days preceding surgery to maximize the ability to capture preoperative consultations that may have led to a delay in scheduling the surgical procedure.
Anzeige

We calculated the Deyo comorbidity index using diagnostic codes present within 365 days before surgery (Deyo et al. 1992). The Deyo comorbidity index was used as an ordinal variable with categories 0, 1, 2, and ≥ 3. We also calculated the Revised Cardiac Risk Index (RCRI) (Lee et al. 1999), which predicts cardiac complications. However, we did not include the RCRI in the final analyses because very few patients were class III or IV risk (98.6% were class I or II), and the RCRI index did not significantly predict consultation after adjusting for the Deyo index. Surgical procedures were categorized into low, intermediate, and high levels of surgical risk. Patient demographics included age and gender. We used the ZIP code of patient residence to allocate patients to seven hospital referral regions (HRRs) (Everett, Olympia, Seattle, Spokane, Tacoma, and Yakima (all WA cities), and Portland, OR) and to determine patient’s Rural Urban Commuting Area (RUCA) category (urban, large rural city, small rural town, and isolated rural town). HRRs are approximate health care markets for tertiary care with at least one hospital that performs major cardiovascular and neurosurgery procedures (Dartmouth Medical School and Center for the Evaluative Clinical Sciences 1996). RUCA codes are a classification scheme for characterizing all of US ZIP codes according to their urban or rural character (WWAMI Rural Health Research Center n.d.).

We summarized counts of consultation and we ordered them by day preceding surgery up to 42 days before the index surgery. We conducted bivariate analyses to compare characteristics of patients who did or did not undergo preoperative consultation. We estimated the association between preoperative consultation (outcome variable) and surgical specialty (explanatory variable of interest) by fitting a log-Poisson generalized estimating equation (GEE) regression model with robust standard errors. GEE permits obtaining marginal population-averaged interpretations of hierarchical data using non-linear link functions. The exponents of beta coefficients from a log-Poisson model are true risk ratios in contrast to the odds ratios produced by a logistic regression. Odds ratios approximate risk ratios but are inflated (i.e., overstate effects) when outcomes are more common or as effects become larger (Kleinman and Norton 2009). Since surgeons are nested within provider organizations without any non-nested clusters, we clustered on provider organization, and the robust standard errors account for clustering at both the provider and organization levels (Betensky et al. 2000). We adjust for potential confounders: age, gender, Deyo comorbidity index, surgical risk, HRRs, and RUCA categories. The log-Poisson model passed model diagnostic tests: the Hosmer-Lemeshow statistic for model misspecification, the Pearson correlation of the raw-scale residuals and predictions, and Pregibon’s link test. A two-sided α level of 0.05 was considered for statistical significance. We report effects as relative risks in the text and Table  2 and also report selected absolute adjusted model estimates in the text and Fig.  2 (main effects model only), as specified (hereafter , adjusted likelihoods). All statistical analyses were performed using Stata 14 (Stata Corporation, College Station, TX, USA).

This study is based on private insurance claims, which may be affected by coding errors or misclassification of preoperative consultation. Consultations most commonly occurred on preoperative days 7 and 14, and with a very low occurrence of visits preceding preoperative day 30, which suggests that most of these visits were associated with a planned surgery (i.e., low misclassification of unrelated visits as preoperative consultations). Furthermore, this pattern’s consistency with prior findings (including our study of an integrated health care system) corroborates the construct validity of our measure of preoperative consultations.
If preoperative medical consultations delayed or canceled surgeries, our data would not include those consultations. However, we believe this limitation is minor, as we used a relatively long, 42-day preoperative window. It is also unknown whether the information resulting from these consultations altered the patient perioperative management. Nevertheless, we have demonstrated that there is a substantial usage of preoperative medical consultation also for patients with limited or no comorbidities, many of whom are undergoing low-risk surgeries. Although this sample is relatively large for studies of preoperative consultation in the US, the sample still had limited power to detect small effects. The study sample included a small number of vascular surgery and neurosurgery patients, and this limits our ability to draw conclusions specific to these specialties regarding consultations. In the absence of a broad consensus regarding an optimal surgical-risk categorization for all procedures listed, we arbitrarily assigned surgical risk based on similarities with other known procedures in the same categories, and based on clinical judgment. This risk categorization imperfectly differentiates average risk across procedures. We included other covariates to additionally adjust for individual- and geographic-specific factors that predict preoperative consultations, although we could not entirely eliminate selection bias in this observational study.

The datasets analyzed during the current study are not publicly available due to the Data Use Agreement with Premera Blue Cross, Seattle, WA, but may be made available from the corresponding author on reasonable request.

The University of Washington Human Subjects Division reviewed this study and determined that it is not a human subject research.

We have permission from Premera Blue Cross insurance company to publish this analysis. 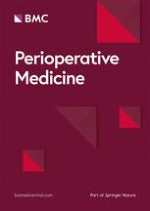 Predictors of chronic prescription opioid use after orthopedic surgery: derivation of a clinical prediction rule.

What is the effect of perioperative intravenous iron therapy in patients undergoing non-elective surgery? A systematic review with meta-analysis and trial sequential analysis