Patients with large incisional hernias have significant morbidity and their management is a challenge for the surgical team because of the large abdominal wall involvement. The choice of surgical technique is still controversial. The purpose of this study is to analyze the predictive factors for recurrence after intraperitoneal mesh repair in patients with large incisional hernias.

A retrospective cohort observational study with a prospectively collected database was performed in the Hospital Clinico San Carlos (Madrid, Spain). All consecutive patients operated on from January 2009 to December 2014 with incisional hernia of 10 or more centimeters in its transverse diameter were included. An intraperitoneal repair with a composite mesh fixed with discontinuous absorbable suture and fibrin sealant was performed. Demographic data, comorbidities, and early and long term outcomes were analyzed. The primary outcome was the presence of recurrence.

The recurrence rate after intraperitoneal mesh repair in patients with large incisional hernias might be associated with ASA III–IV, use of Composix Kugel™ mesh, and superficial surgical site infection. 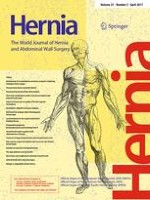 The feasibility of local anesthesia for the surgical treatment of umbilical hernia: a systematic review of the literature

The Open Abdomen Route by EuraHS: introduction of the data set and initial results of procedures and procedure-related complications