To test the effect of tumor location (urachal vs. non-urachal) on cancer-specific mortality (CSM) in patients with adenocarcinoma of the urinary bladder (ADKUB).

Within the Surveillance, Epidemiology, and End Results registry (2004–2016), we identified patients with non-metastatic (≤ T4N0M0) ADKUB. Stratification was made according to tumor location: urachal vs. non-urachal ADKUB. Kaplan–Meier plots and multivariable Cox regression models were fitted before and after 1:3 propensity score (PS) matching and separate Cox regression models were refitted before and after inverse probability of treatment weighting (IPTW).

The distinction between urachal vs. non-urachal ADKUB indicates better prognosis when the origin of the tumor is urachal, regardless of methodological approach used for the comparison. 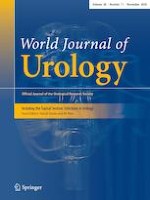 TUR-P phantom for resident surgical training: food-based design as a human mimicking model of the prostate

Urological infections in the developing world: an increasing problem in developed countries

The efficacy of medical dissolution therapy for uric acid nephrolithiasis