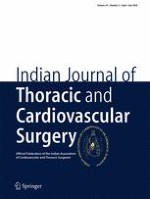 A live workshop which redefined my skills and attitude

Incidental finding of coarctation of the aorta in a Marfan patient: a case report

Abstracts of the 64th Annual Conference of IACTS, February 2018