Disorders of swallowing are poorly characterized but quite common in schizophrenia. They are a source of considerable morbidity and mortality in this population, generally as a result of either acute asphyxia from airway obstruction or more insidious aspiration and pneumonia. The death rate from acute asphyxia may be as high as one hundred times that of the general population. Most swallowing disorders in schizophrenia seem to fall into one of two categories, changes in eating and swallowing due to the illness itself and changes related to psychotropic medications. Behavioral changes related to the illness are poorly understood and often involve eating too quickly or taking inappropriately large boluses of food. Iatrogenic problems are mostly related to drug-induced extrapyramidal side effects, including drug-induced parkinsonism, dystonia, and tardive dyskinesia, but may also include xerostomia, sialorrhea, and changes related to sedation. This paper will provide an overview of common swallowing problems encountered in patients with schizophrenia, their pathophysiology, and management. While there is a scarcity of quality evidence in the literature, a thorough history and examination will generally elucidate the predominant problem or problems, often leading to effective management strategies. 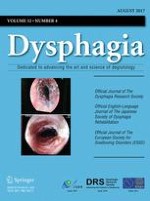 The Anxiety Level of Caregivers of Neurological Patients with Dysphagia