Symptoms Suggestive of Dysphagia and the Quality of Life in Cocaine and/or Crack Users | springermedizin.de Skip to main content
TOOLBAR 1 2 3 4
SUCHE MENÜ 1 2 3 4

Users of cocaine and/or crack may present symptoms of dysphagia due to changes in anatomical structures caused by the use of these substances. The objective of this study was to investigate the presence of symptoms suggestive of dysphagia in users of cocaine and/or crack seeking treatment, as well as to investigate the quality of life of these individuals related to their swallowing condition. A cross-sectional study from September 2015 to December 2016, with 121 users of cocaine and/or crack, was conducted. 59 of them called a telemarketing service and 61 sought treatment at the Centro de Atenção Psicossocial Álcool e Drogas in Porto Alegre (Psychosocial Alcohol and Drug Center). Users were screened and asked to fill the Eating Assessment Tool questionnaire. Users who presented themselves at the center were submitted to the Tool Volume-Viscosity Swallow Test. Users with symptoms of dysphagia responded to the Quality of Life in Swallowing questionnaire. Of all the interviewees, 22.3% (n = 27) reported symptoms suggestive of dysphagia and 2% of the individuals, submitted to swallowing test, presented cough in the liquid consistency. The scores showed a negative impact on quality of life, mainly related to fatigue, sleep, feeding duration, and fear of eating. Significant numbers of users of cocaine and/or crack referred to symptoms suggestive of dysphagia and significant impairments in quality of life, which require specific care in feeding this population in order to assist in their rehabilitation. 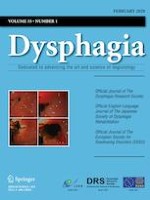 Trends in Reporting of Swallowing Outcomes in Oropharyngeal Cancer Studies: A Systematic Review