The online version of this article (doi:10.​1245/​s10434-016-5535-2) contains supplementary material, which is available to authorized users.
Presented in part at the 86th Annual Meeting of the Gesellschaft für Pädiatrische Onkologie und Hämatologie (GPOH), 20–21 November 2015, Frankfurt, Germany.

Recurrence of synovial sarcoma (SS) has been associated with poor prognosis. Optimal treatment is unknown due to heterogeneous primary therapies with or without chemotherapy.

Data of patients treated in consecutive prospective European Cooperative Weichteilsarkom Studiengruppe trials 1981–2010 with primary localized SS less than 21 years were analyzed. Chemotherapy had been recommended for all SS patients during primary therapy.

Of 220 patients, 52 experienced recurrence a median of 2.5 years (range, 0.3–11.6 years) after their initial diagnosis. Recurrence was local in 22 (42 %), metastatic in 24 (46 %), and combined in 6 (12 %) of the 52 patients. If present, metastases involved the lungs in more than 90 % of the patients. Second remission was achieved by 39 (75 %) of the 52 patients, whereas only 12 (23 %) of the 39 patients maintained it. The median follow-up period for 17 survivors was 6.7 years (range, 3.2–19.6 years). The 5-year post-relapse event-free survival probability was 26 %, and the overall survival probability was 40 %. In the univariable analyses, initial tumor smaller than 3 cm, 2.5 years or longer to recurrence, local relapse only, and R0/R1 resection at relapse correlated with improved survival expectancies. In the multivariable analysis, the only factor retaining significance was R0/R1 resection of the recurrence. No difference between R0 and R1 resections was evident. For the patients with metastatic relapse, maintenance therapy seemed to prolong the time to subsequent recurrences.

Although 75 % of the patients with first SS recurrence achieved a second remission, only a minority became long-term, disease-free survivors. They had small tumors at initial diagnosis, local relapse as the only site of involvement, and complete resection of their recurrence. Because the majority of patients relapse subsequently, quality-of-life-based treatment approaches prolonging disease-free intervals are needed. 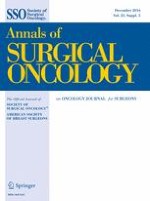 PTFE Graft as a “Bridge” to Communicating Veins Maturation in the Treatment of an Intrahepatic Cholangiocarcinoma Involving the 3 Hepatic Veins. The Minor-but-Complex Liver Resection