Many patients worldwide suffer from cardiovascular diseases for which an underlying factor is thrombosis. Devising a molecular imaging technique for early detection of thrombosis in a clinical setting is highly recommended. Because fibrin is a major constituent of clots and is present in all types of thrombi but absent in circulation, it is a highly specific and sensitive target for molecular imaging of thrombi. It is assumed that cyclization of peptides will improve the receptor binding affinity and stability of the peptide. In the present study, we have developed linear and cyclic fibrin-binding peptides for thrombus imaging and compared their biological properties.

Linear HYNIC-GPRPP and cyclic HYNIC-CGPRPPC peptides were synthesized using a standard Fmoc strategy and radiolabeled with Tc-99m. The stability of the radiolabeled peptides in human plasma and their affinity for fibrin and blood clots were determined. Blood clearance and biodistribution were evaluated in rats and mice, respectively. The peptide with the highest affinity was injected to a live rabbit femoral thrombosis model, and scintigraphic images were obtained.

The results indicate that the cyclic peptide is a promising agent for molecular imaging of fibrin using SPECT. 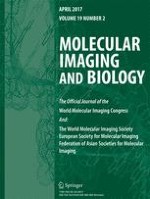 High-Throughput Approaches to the Development of Molecular Imaging Agents