Malignant pleural mesotheliomas (MPM) are most often surgically unresectable, and they respond poorly to current chemotherapy and radiation therapy. Between 23 and 64% of malignant pleural mesothelioma have somatic inactivating mutations in the BAP1 gene. BAP1 is a homologous recombination (HR) DNA repair component found in the BRCA1/BARD1 complex. Similar to BRCA1/2 deficient cancers, mutation in the BAP1 gene leads to a deficient HR pathway and increases the reliance on other DNA repair pathways. We hypothesized that BAP1-mutant MPM would require PARP1 for survival, similar to the BRCA1/2 mutant breast and ovarian cancers. Therefore, we used the clinical PARP1 inhibitors niraparib and olaparib to assess whether they could induce synthetic lethality in MPM. Surprisingly, we found that all MPM cell lines examined, regardless of BAP1 status, were addicted to PARP1-mediated DNA repair for survival. We found that niraparib and olaparib exposure markedly decreased clonal survival in multiple MPM cell lines, with and without BAP1 mutations. This clonal cell death may be due to the extensive replication fork collapse and genomic instability that PARP1 inhibition induces in MPM cells. The requirement of MPM cells for PARP1 suggests that they may generally arise from defects in HR DNA repair. More importantly, these data demonstrate that the PARP1 inhibitors could be effective in the treatment of MPM, for which little effective therapy exists. 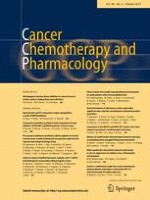 Antiangiogenic tyrosine kinase inhibitors in colorectal cancer: is there a path to making them more effective?

A phase I, randomized, single-dose study evaluating the pharmacokinetic equivalence of biosimilar ABP 215 and bevacizumab in healthy adult men