Hiatus hernia (HH) contributes to the pathophysiology of gastroesophageal reflux disease (GERD). Mesh-augmentation of surgical repair might be associated with a reduced risk of recurrence and GERD. However, recurrence rates, mesh-associated complications and quality of life (QOL) after mesh versus suture repair are debated. The aim of this meta-analysis was to determine HH recurrence following mesh-augmentation versus suture repair. Secondary aims were to compare complications, mortality, QOL and GERD symptoms following different repair techniques.

A systematic literature search of the PubMed, Medline, Embase, Cochrane Library, and Springer database was performed to identify relevant studies comparing mesh-augmentation versus suture repair of the esophageal hiatus. Data pertinent to the benefit versus risk outcomes for these techniques were extracted and compared by meta-analysis. The odd ratio (OR) and mean differences (MD) with 95% confidence intervals were calculated. 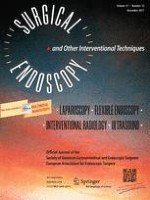