Twenty-six eligible articles published until October 2017 were identified in PubMed, PsycINFO, Web of Science, and additional records. Information on study characteristics, genetic polymorphisms, and PN symptoms was extracted. Study quality was evaluated by the STrengthening the REporting of Genetic Association (STREGA) guideline. Genes included in the analysis were categorized by biological pathways based on the Reactome database.

A total of 54 single nucleotide polymorphisms and haplotypes that are significantly associated with PN symptoms were identified; half of them were associated with increased severity of PN symptoms, while the other half contributed to the decrease of PN symptoms. Pain has the known highest number of associated genetic polymorphisms reported, followed by fatigue, cognitive impairment, depressive symptoms, sleep disturbances, and anxiety. The majority of genetic polymorphisms were involved in immune system and neuronal system pathways. Most studies were unsuccessful in meeting the STREGA guideline, which requires transparent reporting of methods and results.

This review provides comprehensive evidence of genetic polymorphisms underlying PN symptoms, which may pave the way for the development of personalized therapeutics targeting these symptoms. More well-designed genome-wide association studies are required to validate and replicate these findings. 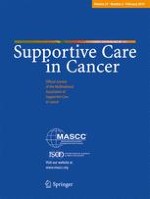 Radiotherapy for cutaneous head and neck cancer and parotid tumours: a prospective investigation of treatment-related acute swallowing and toxicity patterns

Correction to: The impact of social-emotional context in chronic cancer pain: patient-caregiver reverberations

Exploring the spectrum of late effects following radical orchidectomy for stage I testicular seminoma: a systematic review of the literature

“It sort of hit me like a baseball bat between the eyes”: a qualitative study of the psychosocial experiences of mesothelioma patients and carers