Painful diabetic neuropathy is one of the most common forms of neuropathic pain syndromes. Tumor necrosis factor alpha (TNF-alpha) is a proinflammatory cytokine that has been implicated as a key pain mediator in the development and maintenance of neuropathic pain conditions. Recent studies showed that endogenous TNF-alpha production was also accelerated in neural tissues and spinal cord under chronic hyperglycemia. Thus, in this study, we investigated whether pharmacological inhibition of TNF-alpha by etanercept, a TNF-alpha antagonist, could block behavioral sign of diabetic neuropathic pain. Diabetes was induced by streptozotocin (STZ) (200 mg/kg, i.p.) in Balb-c mice and behavioral tests were performed between 45 and 60 days after STZ administration. Mechanical and thermal sensitivities were measured by a series of calibrated Von Frey filaments and hot plate test, respectively. Etanercept was given by either intravenous (i.v.), intrathecal (i.th.) or intraplantar (i.pl.) routes to the diabetic mice. Tactile allodynia, but not thermal hyperalgesia, developed in diabetic mice. Both i.v. (1, 10 and 20 mg/kg) or i.th. (1, 5 and 10 μg/mouse) treatments with etanercept produced dose dependent reversal of tactile allodynia in diabetic mice. However, etanercept was found to be inactive against allodynia when given i.pl. (1, 5 and 10 μg/mouse). Our results suggest that etanercept has promising effects on diabetic neuropathic pain with antiallodynic effects when given systemically or intrathecally. 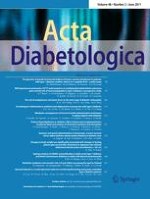 Mild hyperhomocysteinemia, C677T polymorphism on methylenetetrahydrofolate reductase gene and the risk of macroangiopathy in type 2 diabetes: a prospective study

The glycemic and peak incremental indices of honey, sucrose and glucose in patients with type 1 diabetes mellitus: effects on C-peptide level—a pilot study