Takotsubo cardiomyopathy, also known as “broken heart syndrome,” is a cardiac entity characterized by transient left ventricular dysfunction without obstructive atherosclerotic coronary artery disease. An episode of emotional stress is believed to act as a trigger in the development of this syndrome, which typically occurs in female patients. We report a fatal case of a previously healthy 70-year-old woman who suffered an out-of-hospital cardiac arrest and cardiac rupture during emotional distress, due to Takotsubo cardiomyopathy. Ventricular rupture with Takotsubo cardiomyopathy is rare, but our case emphasizes the importance of dealing with this serious and potentially life-threatening disease. Takotsubo cardiomyopathy should be considered as a differential diagnosis in cases of early-developing heart failure, and clinicians should subsequently use adequate diagnostic and therapeutic options. 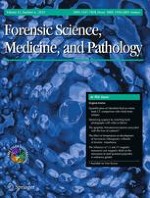 The influence of 1.5 and 3 T magnetic resonance unit magnetic fields on the movement of steel-jacketed projectiles in ordnance gelatin