We explored the use of intraventricular 131I-Omburtamab targeting B7-H3 in patients with ETMR.

Patients were enrolled in an IRB approved, phase 1, 3 + 3 dose escalation trial. Patients with CNS disease expressing the antibody target antigen B7-H3 were eligible. We report on a cohort of three patients with ETMR who were enrolled on the study. Three symptomatic children (ages 14 months, 3 and 3.5 years) had large parietal masses confirmed to be B7-H3-reactive ETMR. Patients received 2 mCi 131I-Omburtamab as a tracer followed by one or two therapeutic 131I-Omburtamab injections. Dosimetry was based on serial CSF, blood samplings and region of interest (ROI) on nuclear scans. Brain and spine MRIs and CSF cytology were done at baseline, 5 weeks after 131I-Omburtamab, and approximately every 3 months thereafter. Acute toxicities and survival were noted. 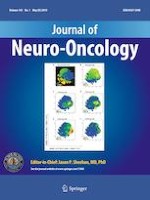