Pediatric inflammatory bowel disease (IBD) is a heterogeneous disorder caused by multiple factors. Although genetic and immunological analyses are required for a definitive diagnosis, no reports of a comprehensive genetic study of a Japanese population are available.

In total, 35 Japanese patients <16 years of age suffering from IBD, including 27 patients aged <6 years with very early-onset IBD, were enrolled in this multicenter study. Exome and targeted gene panel sequencing was performed for all patients. Mutations in genes responsible for primary immunodeficiency diseases (PID) and clinical and immunological parameters were evaluated according to disease type.

We identified monogenic mutations in 5 of the 35 patients (14.3 %). We identified compound heterozygous and homozygous splice-site mutations in interleukin-10 receptor A (IL-10RA) in two patients, nonsense mutations in X-linked inhibitor of apoptosis protein (XIAP) in two patients, and a missense mutation in cytochrome b beta chain in one patient. Using assays for protein expression levels, IL-10 signaling, and cytokine production, we confirmed that the mutations resulted in loss of function. For each patient, genotype was significantly associated with clinical findings. We successfully treated a patient with a XIAP mutation by allogeneic cord blood hematopoietic stem cell transplantation, and his symptoms were ameliorated completely.

Targeted sequencing and immunological analysis are useful for screening monogenic disorders and selecting curative therapies in pediatric patients with IBD. The genes responsible for PID are frequently involved in pediatric IBD and play critical roles in normal immune homeostasis in the gastrointestinal tract. 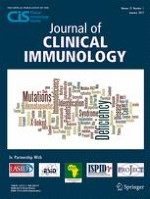