Taxane acute pain syndrome (TAPS) is characterized by myalgias and arthralgias starting 24–48 h after taxane-based chemotherapy and lasting for 5–7 days. Relatively little is known about its incidence and impact on quality of life.

Embase, Cochrane, and Ovid MEDLINE were searched from 1947 to July 2015. Data was sought from randomized controlled trials (RCTs), prospective and retrospective observational studies. Two reviewers independently screened citations and full text articles. Outcomes of interest were the incidence of TAPS and its impact on quality of life.

The incidence of TAPS varies between taxanes, regimens, and disease settings. In order to identify patients at the greatest risk of TAPS, and hence optimize its prevention and management, standardized methods of diagnosing and measuring TAPS are needed. 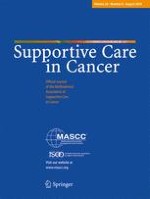