The retrorectus Rives-Stoppa repair of midline incisional hernias is the preferred open approach of many herniologists [ 1‐ 4]. With larger hernias; however, a tension-free medialization of the anterior and/or posterior sheath or the rectus muscles may not be possible. This often results in a bridging-type repair or “patching” of the hernia with exposure of the prosthesis in the subcutaneous space, which is not well vascularized. Moreover, the lack of medialization of the rectus muscles leads to a less functional, engineered abdominal wall [ 5]. In this situation, the anterior component separation, as proposed originally by Ramirez et al. [ 6] was described to allow a more tension-free medialization of the rectus muscles with autogenous closure of the medial edge of the anterior rectus fascia. This technique of full lateral mobilization of the skin/subcutaneous complex off the anterior abdominal fascia was modified by Dumanian, Butler, Rosen, and collegues [ 6‐ 9] to minimize disruption of the perforating blood vessels supplying the skin and subcutaneous tissues of the advancement flap. The posterior component separation, also often referred to as the transverse abdominis release (TAR) as described more clearly by Novitsky et al. [ 10, 11], was developed to prevent disruption of the perforating blood vessels and to release the lateral force generated by the transversus abdominis muscle and aponeurosis rather than the oblique force of the external oblique muscle. These maneuvers restore the midline continuity of the musculofascia of the abdominal wall, allegedly maximize abdominal wall function, place the prosthesis extraperitoneally, and cover the prosthesis with vascularized autogenous tissue (rectus muscleanteriorly and posterior rectus fascia/peritoneum/preperitoneum posteriorly). …
Anzeige 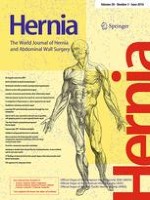 Location of recurrent groin hernias at TEP after Lichtenstein repair: a study based on the Swedish Hernia Register