The purpose of this article was to demonstrate an anterior cruciate ligament (ACL) reconstruction technique using oval tunnels. Aim of this single bundle technique is to fit the footprint anatomy of the ACL as closely as possible.

The presented technique is a single bundle technique using a semitendinosus graft. For femoral tunnel placement, a specific medial portal aimer (Karl Storz, Tuttlingen, Germany) is used. Aiming and drilling of the femoral tunnel are performed via the medial portal. Oval tunnels are created by stepwise dilatation with ovally shaped dilatators. The position of the femoral tunnel is visualized and controlled with the arthroscope via the medial portal. For the tibial tunnel placement, a specific aimer was used as well. With this technique, 24 patients were operated and all intra- and postoperative complications were analyzed prospectively. The tunnel position was documented postoperatively by CT scan.

There were no significant intra- and postoperative complications associated with the oval tunnel technique. The postoperative 3D CT scan revealed that all femoral and tibial tunnels were located within the area of the anatomical ACL insertions.

This article presents an ACL reconstruction technique using oval dilatators and medial portal aimers to create oval tunnels. These oval tunnels match the insertion site anatomy much closer than round tunnels do. 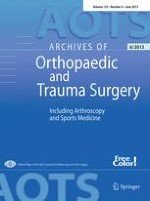 A case of supracondylar humerus fracture with vascular impairment. Open it up?

Is it feasible to rely on intraoperative X ray in correcting hallux valgus?

The effects of corticosteroid injection versus local anesthetic injection in the treatment of lateral epicondylitis: a randomized single-blinded clinical trial