The online version of this article (https://​doi.​org/​10.​1007/​s11060-019-03127-w) contains supplementary material, which is available to authorized users.
Simone Minasi and Caterina Baldi have equally contributed to this work and are both first authors.

Elongation of telomeres is necessary for tumor cell immortalization and senescence escape; neoplastic cells use to alternative pathways to elongate telomeres: telomerase reactivation or a telomerase-independent mechanism termed alternative lengthening of telomeres (ALT). Telomerase and ALT pathway has been explored in adult and pediatric gliomas and medulloblastomas (MDBs); however, these mechanisms were not previously investigated in MDBs metastatic at the onset. Therefore, we analyzed the activation of telomerase and ALT pathway in a homogenous cohort of 43 pediatric metastatic medulloblastomas, to investigate whether telomere elongation could play a role in the biology of metastatic MDB.

We evaluated telomeres length via telomere-specific fluorescence in situ hybridization (Telo-FISH); we assessed nuclear expression of ATRX by immunohistochemistry (IHC). H3F3A and TERT promoter mutations were analyzed by pyrosequencing, while UTSS methylation status was analyzed via methylation-specific-PCR (MS-PCR).

H3F3A mutations were absent in all MDBs, 30% of samples showed ATRX nuclear loss, 18.2% of cases were characterized by TERT promoter mutations, while 60.9% harboured TERT promoter hyper-methylation in the UTSS region. Elongation of telomeres was found in 42.8% of cases. Metastatic MDBs control telomere elongation via telomerase activation (10.7%), induced by TERT promoter mutations in association with UTSS hyper-methylation, and ALT mechanism (32.1%), triggered by ATRX inactivation. Among non-metastatic MDBs, only 5.9% (1/17) showed ATRX nuclear loss with activation of ALT.

Our metastatic cases frequently activate ALT pathway, suggesting that it is a common process for senescence escape in primary metastatic medulloblastomas. Furthermore, the activation of mechanisms for telomere elongation is not restricted to certain molecular subgroups in this high-risk group of MDBs. 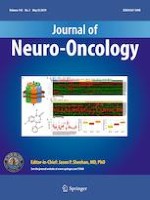