Heparin-induced antibodies (HIA) are responsible for causing heparin-induced thrombocytopenia and thrombosis. Research has shown that the temporality of heparin-induced antibodies does not follow the classic immunologic response. The immunobiology of HIA generation remains unclear with varying in vitro and in vivo data. Outpatients undergoing hemodialysis (HD) are exposed to heparin chronically. The HIA immune response can therefore be investigated in vivo in this population.

We examined the time between the start of HD using unfractionated heparin and HIA levels in 212 outpatients during a 6-year period. Antibodies were detected on enzyme-linked immunosorbent assay. HIA levels were analyzed to determine significance of the trend over time. HIA subgroups were also analyzed for correlation with subsequent thrombotic events and platelet count during follow up.

Overall, the HIA response in HD was found to peak early with waning antibody response despite continued exposure to heparin. The peak prevalence of a strong immune response (optical density > 1.000) was early and short lived, while weaker immune response (optical density 0.400–1.000) persisted for the first 6 months then declined. The mean follow-up time per patient was 2.3 ± 1.4 years. Despite circulating HIA, including high titers, no patients developed HIT in this sample. There was no association between HIA and thrombocytopenia. There was increased incidence of thrombosis in patients with strong HIA compared to other groups, but this did not achieve statistical significance. 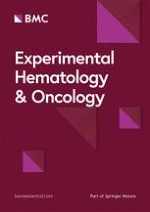 Bullous hemorrhagic dermatosis is an under-recognized side effect of full dose low-molecular weight heparin: a case report and review of the literature