The objective of this study was to determine the association of the CD40LG 3′-UTR (CA)n microsatellite with rheumatoid arthritis (RA) and CD40LG mRNA levels in females from western Mexico. A case-control study with 219 RA patients and 175 control subjects (CS) was conducted. Genotyping was performed by polymerase chain reaction (PCR), X 2 test was used to compare genotype and allele frequencies, and odds ratios and 95% confidence intervals were calculated to evaluate the association between RA and the microsatellite. CD40LG mRNA expression was assessed by real-time quantitative PCR. For comparisons between groups, Kruskal-Wallis or Mann-Whitney U tests for non-parametric data and ANOVA test for parametric data were performed. Among the 13 different alleles identified, CA25 was the most represented (45.4% RA and 46.3% CS). Stratification according to CA repeats as <CA25, CA25, and >CA25 showed a tendency towards a higher frequency of >CA25 alleles in RA patients (29%) compared to CS (23.4%). There was no association between any genotype and the clinical parameters of RA patients. According to the 2-∆∆Cq method, CD40LG mRNA expression in RA patients was 4.5-fold higher compared to CS; this difference was significant when assessed by the 2-∆Cq method (p = 0.028). Compared to carriers of the CA25/CA25 genotype, CS carrying the <CA25/<CA25 genotypes showed greater CD40LG mRNA expression (9.97-fold), unlike RA patients, where expression was 2.55-fold higher for >CA25/>CA25 carriers. The 3′-UTR CD40LG (CA)n microsatellite is not a genetic marker for RA in western Mexican population; however, results suggest that it plays a role in the CD40LG mRNA expression. 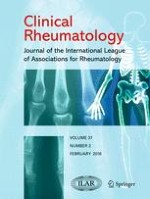