Coffee is a major caffeine-containing food source that can be used for treatment of apnea in prematurity. However, few studies have examined the association between coffee consumption and sleep-disordered breathing (SDB). We investigated whether coffee consumption is associated with the oxygen desaturation index (ODI) as a marker of SDB among middle-aged Japanese male workers.

The subjects were 1126 male local government workers aged 22–59 who participated in SDB screening in 2011–2012. Daily coffee consumption was assessed by a self-administered questionnaire. We measured 3% oxygen desaturation (3%ODI) during a night’s sleep using a pulse oximeter. A general linear model was used to calculate the multivariate-adjusted means of 3%ODI per quartile of coffee consumption. We further analyzed the data after stratifying by overweight and current smoking status.

Our results suggest that higher coffee consumption was associated with lower 3% ODI as a marker of SDB in overweight and non-smoking workers. 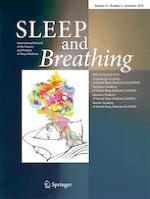 Validation of a portable monitoring device for the diagnosis of obstructive sleep apnea: electrocardiogram-based cardiopulmonary coupling