The Qingdao diabetes risk score (QDRS) is an accurate tool for identifying individuals who are at a high risk for diabetes. This study was designed to determine the association of the QDRS with the incidence of diabetes in the general population in urban and rural settings.

A stratified, random, cluster-sampling method was used to select representative individuals in 2006 and 2009, and the follow-up survey was conducted from 2012 to 2015. Of 5851 participants, 3248 were available in cohort study. The individuals without data of FPG, 2 h PG was excluded in follow-up survey. Finally, a total of 3033 participants were included. Waist circumference, age, and family history of diabetes were collected to determine the QDRS. Cox proportional hazards regression models were used to evaluate the association of QDRS and BMI with the incidence of diabetes. Further, we assessed the relative excess risk due to interaction (RERI), synergy index (S), and attributable proportion due to interaction (AP). 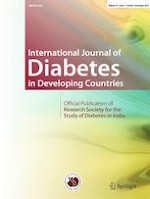 Percent body fat and adiposity indicators: a study among tribal and non-tribal females of India